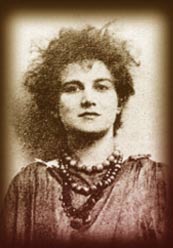 Moina Mathers was born Mina Bergson on February 28, 1865, in Geneva, Switzerland. She was the fourth out of se ven children. Her parents, Michel Gabriel Bergson and Katherine Levison, were an Irish-Jewish couple who migrated from Dublin, Paris; and it was probably from her mother that Moina adopted her inclination towards the spiritual. Due to her father's fervent search for opportunity in which he could support his growing family by utilizing his musical talents, Moina was but two-and-a-half years old when they returned to Paris. However, even after seven years of hard work, Paris failed in providing a constant job, which resulted in the family moving again, but this time permanently, to a London suburb in 1873.
Though art had always been an interest and a talent to Moina, it was not until the age of 15 that she actually decided to study and refine her ability. She attended Slade High School, and it was here that she became best friends with the famous Annie Horniman, who later on would be the main financial support for both her and S. L. MacGregor Mathers, in the building of the Hermetic Order of the Golden Dawn. Inspired and enthusiastic, Moina was able to obtain a scholarship and four certificates for drawing. It was her dream that one day she would be able to carry on a successful art career, yet, her future beckoned a different twist of fate when she met the man who would change her life, forever, one day in a visit to the British Museum.

It was in 1888, while emersing herself in the study of Egyptian art, or some say, while engaging herself in the famous reading room, that she first met MacGregor Mathers, the one who would set her destiny and who, uncannily resembled her brother, Henri Bergson, despite the strong disapproval of her parents, owing to Mathers' lack of a steady income, as from the neglected and jealous best friend, Annie Horniman, the two were joined in marriage on June 16, 1890, in the library of the Horniman Museum. Now, Mina Bergson became Moina Mathers (Mathers changed Mina to Moina so as to give it a more Highland sound.)
Their relationship was an unusual one indeed, yet it was a sacred and unique bond that few individuals get to experience. They were partners in the truest sense of the word. In fact, Moina believed that she halved a soul with Mathers, and would refer to him as her husband, friend and teacher. At the onset of their relationship, both had made an agreement to abstain from any sexual intercourse. This, however, created no barriers against their intimate closeness with one another. There is no certain reason known as to why the idea of sex repulsed her, but one may deduce that she was, perhaps abused as a child. If so, then the motto that she went by, "Vestiga Nulla Retrorsum," meaning "I never retrace my steps," may indicate the unwillingness to reflect upon a painful past. This, however, may not be the case at all, for it may instead denote the steadfast and inner strength that one must have in order to bury the mundane life and carry the cross upon the pathway to perfection – doing the Great Work. This would require self-sacrifice, and self-sacrifice was something that Moina was familiar with. In fact, she gave up the dream of one day having a prosperous art career in order that the Hermetic Order of the Golden Dawn would flourish under the applied use of her artistic talents in the service of Divine Light. It was Moina who constantly kept busy with the making of Temple furnishings, both in London and Paris, with regalia and diagrams for the grade material, such as tarot cards. Perhaps one of the greatest contributions on an artistic level was the creation of the color scales of the Order and the painting of several vaults. Some of the vaults she painted under the instruction of Mathers, included those of the Isis Urania, Ahathor, Alpha et Omega, and possibly Alpha et Omega. 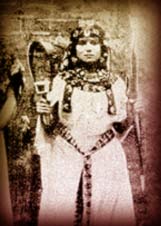 In addition to the great artistic contributions to the Hermetic Order of the Golden Dawn, Moina Mathers supplied much of the Inner Order information through the use of her clairvoyant skills. Working as a team, with Mathers as the mage and Moina as the scrying sibyl, they brought forth material from the inner planes which formed the basis of the Second Order.

These accomplishments, however, do not fully reveal the remarkable traits of Moina Mathers. In addition to being talented in the area of art and mediumship, she was a very noteworthy teacher and magician, and was fluent in French, German, and English. When she spoke, it was with a voice of resonance of which without a doubt, proved her knowledgeable. Her demeanor would be that of great calmness that evoked a certain presence of inner power. She had a captivating presence, especially when she "incarnated" the High Priestess of Anari, in the Isis Rites composed by Mathers and Bois.

Those close to her would comment on how charming and sweet she was, and there is no doubt that she fit the role of Isis with her springy brown hair, darkly glowing skin, and blue eyes.

Feeling guided by the Secret Chiefs, it was in 1892 that the Mathers moved to Paris where they established the Ahathoor Temple two years later. Though, through most of their life together they experienced a poversih lifestyle, it was here that the conditions were for some time taken to an extreme. This change of location was, perhaps, one of the gravest mistakes made, for it allowed the seeds of dissension to grow as a cancer among the unattended "children" back at the Isis-Urania Temple. The advanced esoteric knowledge given to them seemed beyond their capacity to comprehend or take seriously in the manner it was designed for. The turn of the century did prove fatal for the Mathers for it involved schism, and three major disasters that revolved around MacGregor Mathers, litigations and unwanted publicity. Also, at this time, the Mathers, moreso than ever, lived from one location to the next with the conditions gradually worsening.

It is unknown for certain whether or not Moina returned with MacGregor for two years to London sometime in 1910, but chances dictated that she remain in Paris to run the Temple. After many legal affairs involving scandals and battles with Crowley over publication of certain G.D. doctrine, Mathers returned to Paris in 1912, and six years later, died on November 20, 1918. There is much dispute as to the actual cause of his death, yet Moina supports that it was due to the accumulative effects of the visits of the Secret Chiefs of which whose presence is impossible for a mere moral to endure.

Feeling disoriented without her husband's direction, Moina Mathers, nevertheless, continued the work in his footsteps and established the Alpha et Omega Lodge, of which she ran somewhat successfully for 9 years after returning to London in 1919. Though she feared occult attack due to the years of strenuous inner planes work with her husband, it appears that she attempted to continue the communication within the spiritual planes through the help of a certain mysterious Frater X, since others had proved unsuitable for the task. Indeed, Dion Fortune was one of them who claimed that Moina Mathers was responsible for the murder of a Miss Netta Fornario by means of black magic. Of course, this accusation was ludicrous since the death of Moina occurred 18 months previous to the incident. 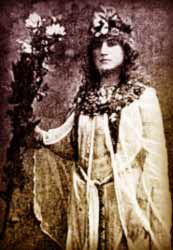 It is sad to say that during this period of time, now alone and responsible for supplying her own income, Moina was in the deepest trench financially than she had ever been before. She labored in vain to try to salvage her art career, to support herself by re-instituting her portrait painting as she had done sporadically in the early days in Paris. However, some say that her artistic ability had degenerated due to the constant involvement and focus upon the Order and its needs.

Within the year of 1927, Moina's health began to drastically decline, and soon, she got to the point of refusing all food. This could have been an "exaggerated extension of her husband's vegetarianism (Sword of Wisdom, Ithell Colqhoun)," yet perhaps there is a much deeper and significant reason. Recall how she had persisted that the explanation for her husband's demise was due to the "call" of the Secret Chiefs. Is there a possibility that Moina Mathers herself felt that same calling, and that the fasting was simply a means of purification for that final transformation unto the Third Order? Her self-sacrifice and dedication unto God's service was surely an indication of a truly spiritual being, and this would make the decision to purge oneself in readiness to enter into the invisible much more than a mere possibility. So thus, at St. Mary Abbott's Hospital on July 25, 1928, Moina Mathers passed from this dying world and ascended beyond that lower self-hood unto that highest self-hood, which is the clear light of the spirit.