Qabala & the Golden Dawn
By: G.H. Frater P.D.R.  ( Robert Zink )
The study of the Qabala has its roots deep in Jewish Mysticism. The term Qabala or Kabbala as a word did not come into use until the 12th century. This does not mean that the Qabala was not being proven by Mystics who were hungry for truth.

We must be careful not to confuse Mysticism with Religion. In this case, the Jewish Mysticism is different from the Jewish Religion. The Qabala attempts to go by the orthodox tradition of the religion.

Here are some fundamental differences between Jewish Mystical thought as it relates to the Qabala and standard rabbinical Judaism.

The Creator God of the Bible is of "Positive Existence" whereas there is the source of this Creator God which is God of "Negative Existence." Qabalists call this Ain-Soph, the limitless or boundless. This does not mean that there is more than one "Prime Mover," as Aristotle would call it, but rather the God we know is only the manifested aspect of the Greater unmanifest.
The Universe is a result of emanations from the Divine, not just a simple God-creation story.
The Sephiroth or emanations are a bridge that helps us connect the finite universe with the Unknowable One, the Infinite. 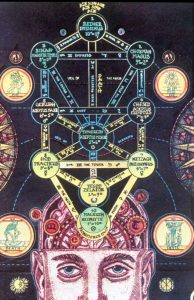 There are many schools of Qabala. The Golden Dawn Ancient Mystery School teaches a version based on the Sepher Yetzirah, or the "Book of Formation," along with numerous Hermetic writings and traditions. The Golden Dawn System is not limited to just Jewish lore but can explore Egyptian archetypes as they relate to the Qabalah, Christians, Greek, Gnostic and others. This allows a very robust integration of valued systems that have proven themselves in antiquity to be utilized concerning Qabalistic thinking and philosophy.

Besides, the Golden Dawn System teaches a practical aspect to the Qabala. This means we can take the information that we have and apply it to ways of improving our world and our life. This is called the "Magic of Light."
One of the more common mistakes people make is thinking that the traditional Golden Dawn was a Magical Order. The traditional Golden Dawn is a Fraternity and School that prepares people to do and perform magic. This magical work comes only after the student is willing and has gone through the five Outer Order Grades. Then the student is prepared to build a sound basis in practical Qabala workings and methods.