The Cross & Triangle Spread
By: V.H. Frater P.C.A.
The following is a unique spiritual spread that you may wish to try. I have had good results with it when I have used it on a divination basis. I believe this spread will satisfy some of you who have asked for other methods and layouts for Major Arcana divination.

This spread is based on the Cross and Triangle that rest upon the altar in the Hall of the Neophyte. The extended symbology of these symbols can be found in The Golden Dawn by Israel Regardie (Llwellyn Publishing). The spread uses only the Major Arcana of the Tarot. Because this is a spiritual divination, it will not require the Minor Arcana of the Tarot.

Mix your 22 Major Arcana cards up. The question that you are asking should be firmly in your mind. I suggest you also invoke Hru before you begin shuffling. Hru is the angel set over the Tarot and divination. It is this angel's job to see that your divination is accurate and clear.

Now that you have shuffled the cards and performed your invocation to Hru, you will lay out the cards in the following order:

Place the first card down. This is your significator. This is you! This card gives you the prime energy manifesting in your life right now, regarding the question.

Place the second card above the significator. This is the element of Air. This card tells you the influences upon your thoughts and mind.

Place the 3rd card to the right of the significator. This is Fire. This card shows what kind of influences are affecting you emotionally. Also, shown is what is affecting your more primal and basic emotions.

Place the 5th card to the left of the significator. This is Earth. How are we being affected on the physical plane? This also tells us of spiritual effects directly upon the situation in the physical world.

At this point, your spread looks like a cross: 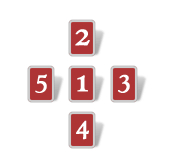 Now you have some idea of the spiritual and karmic forces around you. The next step is the formation of the triangle. You will lay down two cards (numbers 6 and 7). These are the opposing energies regarding your question. The fact that you have a question indicates there are opposing forces. These forces may be internal. Often times inner archetypes will battle within as giving us a sense of conflict.

Card number 8 is the reconciler. This is the energy you may wish to meditate on and bring more of into your life in order to resolve the archetypal conflict. This is also the force that resolves things naturally, if you do nothing about the situation. Now you have a triangle below the cross, just like the 0=0 Neophyte Initiation in the Golden Dawn.

The final card goes into the center of the triangle. This is the final results card. The triangle in magical operations is called the Triangle of Manifestation. Your entire spread should now look like this:

Remember to word your question right, such as: "What is the probable outcome to me if I take a trip to Russia?" Also, the more you use the Cross and Triangle Spread the more sense it makes. I would also suggest you begin with only the right side up keys. Do not use reverse keys in the beginning.

Give the spread some time and energy, then write to let
me know how it works for you.
In L.V.X.
Frater P.C.A.