Women of the Golden Dawn 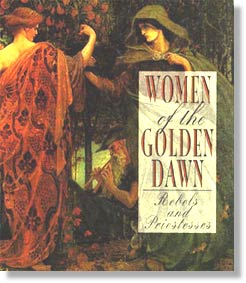 Mary Greer's "Women of the Golden Dawn" is the best book on the Golden Dawn tradition to date. Instead of another dry, historical treatise of the Magical Order, Greer really breathes life into the women and men who created, nurtured and integrated the Golden Dawn magical System into their lives. These women were artists with magic as the creative impulse. Greer makes us feel like participants in their pains and joys, failures and victories. Not only does the reader get a full psychological insight into these women, but Ms. Greer shows the astrological influences that shaped

their actions at significant times. This provides an opportunity to improve one's knowledge of Astrology a hundred fold.

This book reads like a novel as Greer draws us into the lives of Moina Bergson Mathers, Annie Horniman, Maud Gonne and Florence Farr. We see them grow to womanhood in a restrictive Victorian society. She explains through their astrological aspects why they rebelled from convention and then were able to stand on equal footing with the Masons who formed the historic Golden Dawn.

When seen through the female perspective, a whole new understanding of Mathers, Yeats, and G.B. Shaw emerges, probably better than any previous biographies of these men. Greer shows how each of these four women's divergent personalities interacted to contribute to the growth of the historic Golden Dawn and then clashed leading to its breakup. Still, they never stopped being Magicians, instead transforming their Magic into poetry, music, Plays, establishing theaters and even liberating Ireland from the British.

Most importantly, through an excellent referenced endnote system, Mary Greer shows the specialized contributions these women made to the Golden Dawn Magical System. The Magical operations these women helped create are beautifully presented. Their actual Tarot and astrological divinations are interpreted on significant events. Early on Greer describes an Enochian skrying session between Mathers and Yeats with Moina as the Seer. Later, we experience Florence Farr's and Allen Bennett's "Evocation of the Spirit Tapthartharath." We become privy to W.B. Yeats and Maud Gonne creating their Celtic Mysteries in the Astral. And one real delight is a vivid description of Florence Farr's "Sphere" group projecting the Tree of Life over the City of London. This book is a must for any student of Golden Dawn Magic or member of a Golden Dawn Temple. I grew to love each of these women, especially Florence Farr, and felt a profound sadness in finishing the book. There was something very familiar about these four women. I know them. I have met Moinas, Annies, Mauds, and Florences in the women who practice Magic today. I thank the Divine and Mary Greer that these Rebels and Priestesses still live.

Note: Do not confuse the Historic G.D. written about in the book with Modern Groups using the name Golden Dawn.