Self-Initiation Into The Golden Dawn Tradition 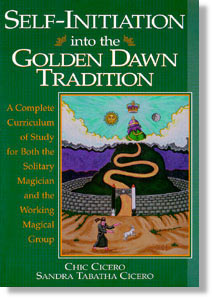 Self-initiation unto the Golden Dawn Tradition is an interesting concept.

Let's start from the cradle of civilization. The Sumerians believed that priests were the Viceroys of the gods on Earth and that they served as initiators unto their mysteries. This ancient concept of initiation declared itself again in the priesthood of Egypt, the Hebrews and the Hierophants of Eleusis. Therefore, so did the mystery schools of our modern era in all of their traditions continue this process.

From a spiritual standpoint, it has been written and proven throughout history that you can't read a book on self-initiation to achieve Adepthood.

Some of the modern examples of this fact would be Moses, Mohammed and Buddha. None of them purchased a book or a tablet. They were all guided by their Higher Genius unto the correct teachers and Hierophants until the final initiation unto Adepthood in a Holy Mountain or similar place by their Higher Genius. At times the Hierophant was none other than the Archangel Gabriel or the Holy Spirit.

Granted, many of us modern seekers of Truth living in today's world may not expect similar events to occur in our lives. So, in turn, we seek different paths unto this truth in the form of the Western Mystery Tradition. To the student attempting to find guidance, first in a companion and beginner's guide, it is like a kid who is dreaming to be a pilot who has purchased either a book or a computer simulation game to teach him how to fly. The child could never be a real pilot through those means alone. Initiation is done by the Higher Genius usually through the proper means and tools. The tools are living energies and go beyond words, pictures or diagrams. In the Golden Dawn tradition, it is in the Hall of the Neophyte where the energies are potently expressed.

Let's presume that person X has just read a couple of books about the history of the historic Golden Dawn. He finds the book on self-initiation, and realization hits home - it is a lot of work! It is not easy reading material. Discouragement sets in. Now let's say he is one of those rare individuals who has a very high mental aptitude and reads the book in two to three months. If he is able to use the material to its fullest extent and invoke the proper energies, he might as well be an Adept. The perfect formulation of all the god forms in the Hall of the Neophyte in itself is taxing and requires great skill, training, and years of practice.

Looking at this from both a practical and magical standpoint, self-initiation is far less valid than an astral one. Yes, you can read the material, and anyone can perform the basic rituals, but if that was all there is to the Mysteries, there would be many more Adepts than chiropractors.

Let's not fool ourselves or others who are sincere enough to seek guidance in books with false hopes. What happened to the Mystery in the words Mystery schools? What happened to the concept of hidden in the terms tradition and Occult? Who is responsible for this mass confusion? Who here is trying to sell what has been treasured for thousands of years as a jewel of the wise?

This book could serve as an aid to students during their growth. As a matter of fact, I am giving this book my recommendation for your purchase. I believe that Chic Cicero has done a good job of compiling the basics of the Outer Order grade material. Buy this book as a reference in your Golden Dawn library, not as a substitue for a Hierophant. While portions of the book do not follow classical Golden Dawn teachings, and often blend various systems that are not part of the Golden Dawn current, overall I suggest the book as a reference tool in your Golden Dawn library.