Peace in Jerusalem – The Modern Mission of the Rose & Cross

HomePeace in Jerusalem – The Modern Mission of the Rose & Cross

The Esoteric Order of the Golden Dawn and its Inner Rosicrucian Order teach the sacred mysteries of Light, and teach the application of the Magic of Light to invoke healing, peace and prosperity into our world. When asked what the Esoteric Order of the Golden Dawn stands for, members of our order have said: “healing”, “teaching”, “invoking the Light”, “invoking Truth”, “invoking Peace”, and while all these answers essentially describe the direction in, which our Order is working, our purpose is far deeper than this.

We visualize a world of true peace and security: a world where no one, especially no child goes hungry or is oppressed or made to live in fear, squalor and disease: not simply the absence of war, but a true brotherhood of man. While some would label this as mere fanciful dreaming and an impossibility, we in the Second Order (R.R. et A.C.), which governs the Esoteric Order of the Golden Dawn know from actual experience that with the Lord of the Universe, there are no limits to what can be accomplished in the Light. We draw from our ancient past the spiritual connection and the proven alchemical principles employed by our ancestors to achieve a higher level of vibration; one, which promotes peace, healing and the increase of Light. True peace is not impossible, but inevitable.

Mystics have long believed that the center of the spiritual world is Jerusalem, and that for true peace to spread throughout the world it must begin with Jerusalem. Key members of the Second Order (R.R. et A.C.), including G.H. Frater P.D.R., Robert Zink, traveled to Jerusalem at a time when everyone knowledgeable in travel and in the Middle East warned that such a trip was too dangerous. This trip, taken at great personal risk and expense to those involved, was designed to invoke the alchemical seeds of peace and to create a condition whereby peace in Jerusalem could be nurtured. This was a magical act of great force, and the results are taking shape: for the first time in many years it appears that peace in Jerusalem is possible and even probable. The Israelis and the Palestinians seem to be ready now to reach a peace agreement; while it is true that this has happened before, the political climate is significantly different than in times past and real progress is expected. However, the driving force behind the peace movement is not political, it is spiritual and it is destiny.

Mystics say that Jerusalem is the center of the spiritual world, at least in part, because it is the Holy Land for the majority of the all the world’s religions: for Christians, it is the place where Christ performed many of his miracles; it is where he hung on the Cross and was entombed. For the Jews, it is the city of King David and is the famous location of the Holy Temple of Solomon, and for the Muslims, it is where Mohammad went through his ascension to the presence of God. These major religions harmoniously exist, sharing this holy city, although their collective histories involve war, contentions and animosities toward each other, but in Jerusalem, these differences are set-aside in the worship of Almighty God. We know that these religious animosities must not be simply set-aside in order to share the Holy City, but they must be transmuted from this inferior lead-like forbearance into the superior gold of true unity and brotherly love; the same kind of love and respect taught in our order. Jerusalem is our global microcosm and this principle applies: as above so below, as below so above, as within so without, as without so within. When we make internal changes, the world outside of our sphere of sensation is subsequently affected; this is microcosmic work. The work, which we do to effect peace in Jerusalem, will affect the whole rest of the world. 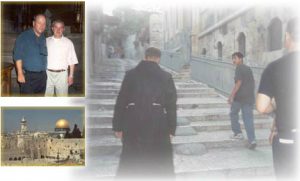 Robert Zink (Frater P.D.R.) has spearheaded this project of invoking peace in Jerusalem; he fervently believes that the Magic of Light is a sacred tool, which must be used to help others. He is fond of the illustration of a doctor going to medical school only to work on himself as a patient; the idea is that it would be as ridiculous for a doctor to train and not use his training to help others as it is for a magician to train in the Magic of Light and then only use his skills to indulge his self and not help others to grow and reach their full potential. That is not to say magic should never be used to benefit one’s self, but magicians of Light will use their skills and power to help others as any doctor would use his medical training.

Frater P.D.R. has built this Order and forged it into a society of Light, and he is now bringing it to the next level by directing its force toward promoting peace in Jerusalem. This goal has not been universally embraced as one may expect; the Esoteric Order of the Golden Dawn, its Inner Rosicrucian Order and G.H. Frater P.D.R. in particular have collected some pretty tenacious enemies as a result of the commitment toward peace in Jerusalem. The forces of darkness are vehemently opposed to any peace for the Jewish, Muslim or Christian people in the Holy City. Despite the many attacks both magical or otherwise, launched against Frater P.D.R. and the Esoteric Order of the Golden Dawn, we are absolutely convinced that true peace and security in Jerusalem and throughout the world is a magical mission of Light worth any effort required for it to manifest.

G.H. Frater P.D.R. began this important project more than ten years ago, and we are still absolutely committed toward working this magic of Light no matter what obstacles must be surmounted. Frater P.D.R and the Second Order (R.R. et A.C.) have devoted time, energy and are committed to persisting for as long as it takes to manifest true peace and security in Jerusalem and throughout the world. 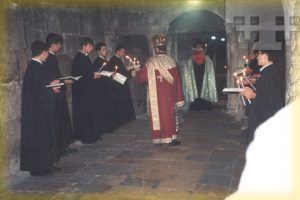 Armenian Priests in the Tomb of the Virgin Mary 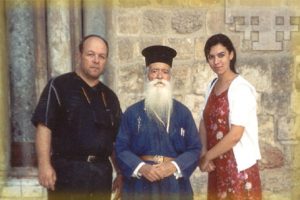 Frater PDR and Soror FDA with Greek Orthodox Patriarch outside of the Holy Sepulchre. 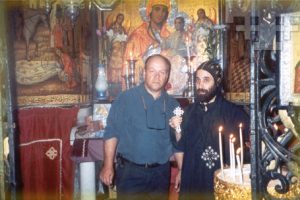 Coptic Priest and Robert Zink in the Holy Sepulcher 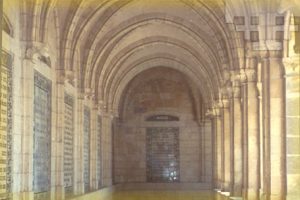 Church of the Pater Noster 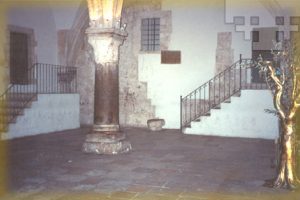 Chamber of the Last Supper 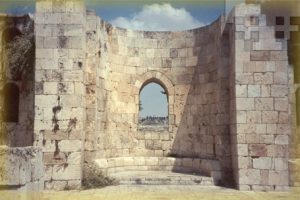 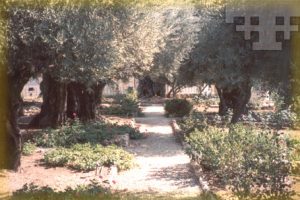 The Tomb of David 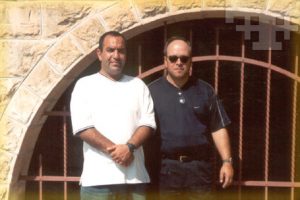 Robert Zink with his guide Amar who lead us through through the different areas of the outer walls of Jerusalem. 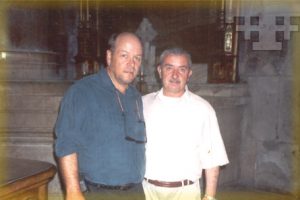 Wajeeh Nuseibeh, a Muslim, says someone from his family has opened and closed the massive wooden doors of Christianity's holiest shrine pretty much every day for more than a millennium. 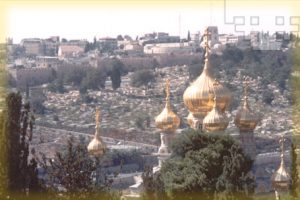 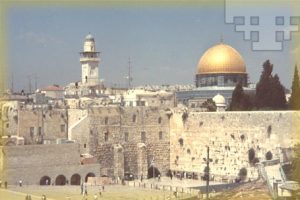 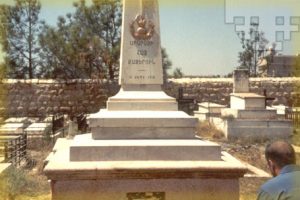