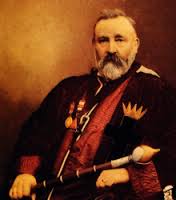 Some years have passed away since it was decided to revive the Order of the G.D. in the Outer, a Hermetic Society whose members are taught the principles of Occult Science, and the practice of the Magic of Hermes; the decease during the second half of the century of several eminent adepts and chiefs of the Order, having caused a temporary dormant condition.

Prominent among these Adepts were Eliphaz Levi, the greatest of--modem French Magi; Ragon, the author of several classical books on occult subjects; Kenneth Mackenzie, author of the Masonic Encyclopedia; and Frederick Hockley, famous for his crystal seeing and his Manuscripts. These and other contemporary adepts received their knowledge and power from predecessors of equal and of greater eminence, but of even more concealed existence. Many of them received indeed the doctrines and system of Theosophy, Hermetic Science, and Higher Alchemy from a long series of practical workers whose origin is traced to the Fratres R.C. of Germany, which association was founded by Christian Rosenkruetz and his brethren so far back as 1398.

Valentin Andrea, the German theologian and mystic, has left us in his works, published in and after the year 1614, an account of the doctrines and exoteric management of the R.C. Society. But even the revival of mysticism was but a new development of the vastly older wisdom of the Kabbalistic Rabbis, and of the most of all secret knowledge, the Magic of the Egyptians, in which the Bible itself tells us that Moses, the founder of the Jewish System, was "learned", that is, in which he had been initiated.

Through the Hebrew Kabbalah, we have indeed become possessed of more of the ancient wisdom than from any other source, for it must be born in mind that the Hebrews were taught at one time by the Egyptians, and at a later date by the Chaldean Sages of Babylon. It is a very curious fact that the Classical nations, the Greek and the Roman, have handed down to us but slight glimpses of the Ancient Magic, and this is the more notable because Greece succeeded to the Mastership of Egypt, and Rome to the Empire of both the Greeks and of the Jews. Greece indeed succeeded to a share of the Mysteries of the Egyptians, for the Eleusinian Mysteries were copies of those more ancient and solemn ceremonies of Isis, Osiris, and Serapis, but they lacked the true Magic of Egypt and further the classics retain but faint glimpses of even the Eleusion Secrets. And these glimpses serve only to disclose the fact that the Eleusinian pupils were partly ignorant of the Isiac Mysteries, a notable example of which is seen in the use of the words, Knox Om Par, of which even they knew not the meaning, the words being merely the Greek incantation of the real ancient Egyptian words whose meaning has been a secret for centuries.

Hence the 0 = 0 grade of Neophyte is found to possess Egyptian characteristics and symbolism, and further an attentive study of the Higher Grades will reveal the source of much of the culture, and illustrate the language of the late Eliphaz Levi, through whose adeptship and advocacy the study of Occultism has been popularized.

The first Order is a group of four Grades to each of which in succession Neophytes are admissible. When duly approved of by the Greatly Honored Chiefs, after showing themselves possessed of sufficient aptitude and knowledge. Beyond them above are three Grades of Adepts forming the Second Order; these have the power of initiating students into the lower grades, and of issuing Warrants for Temples such as that of Isis-Urania. But highest of all in this most ancient scheme are the Great Rulers of the whole system, who severally sustain and govern the Third Order, which includes three magic titles of Honor and Supremacy. These represent the Supernal Triad of the Sephiroth, and are shrouded and unapproachable to the profane, and to all others but the Chiefs of the Adepti; in case of a vacancy in this Order, the Chief most learned and most famous Adept obtains by decree the coveted Supremacy.

The scheme of the G.D. then is formed upon the type of the Decad of the Sephiroth, the ten emanations of Deity, as figured in the very ancient Kabbalah of the Hebrews, whose professors were illuminated by the Higher Magic of the Ancient World. The Grades of the First Order will be found to be of Hebrew Design and inasmuch as the efflux of the time brought on the revelation of the Christos, the Tiphareth, the Beauty of the Microprosopus, so Christian design is reflected in the Higher Degrees.

The Neophyte Grade, and the lst, 2nd, 3rd, and 4th Grades, which this present Isis-Urania Temple is authorized to confer, after due examination and approval in each case, possess Rituals and secrets which had been received from the Greatly Honored Chief Adepts, and were placed by them in the care of V.H. Frater 'S Rioghail Mo Dhream, an eminent Kabbalist, Hermetic Student, and Magister of the Soc. Ros. in Anglia, for revision, and to render them suitable for English students of the present day.

The wording and working arrangements have alone been revised; the foundation of the Sephirotic scheme, and the relative dependence of its several parts, the secret names, and references are untouched and unaltered from the Cipher Manuscripts which were handed to V.H. Sapere Aude, 5 = 6, (whose motto at that time was Quod Scis Nescis), already an Adept and an Honorary Magus of the Soc. Ros. in Anglia, some years before by a most eminent and illuminated Hermetist (since dead),whose title was Frater "Five Momor Lethi". He had been for many years in communication with prominent British and Foreign Adepts, and he had enjoyed ample access to the writing of Eliphaz Levi. This collection of the Manuscripts has since been supplemented by a varied collection of Manuscripts chiefly in cypher, which have been either given or lent to the Chiefs of the Temple by our Continental Fratres and Sorores.

These Manuscripts provide the Adepts who possessed of the secret of their occult meaning with the ability to extend the Order of the G.D. in the Outer subject to the approval of the Chiefs of the Second Order.

This approval having been obtained from the G.H. Soror "Sap: Dom. Ast" in Germany, the Fratres "Quod Scis Nescis", "S Rioghail Mo Dhream ", and "Magna est Veritas", the Supreme Magus of the Soc. Ros. in Anglia, were duly instructed to extend the Order in England, and this Temple was consecrated as a successor to Hermanubis No. 2 which had ceased to exist, owning to the decease of all of its Chiefs.

The Temple No. 1, of Licht, Liebe & Leben is a group of Continental Mystics who have not been in the habit of performing ceremonies in open lodge, but have conferred the Grades chiefly in private, and in the presence of only two or three members. For this reason there is no accurate record of the names and rank of all their members, and very great reticence is shown by them in their communications.

Very soon after the formation of this Temple No. 3, permission was granted for the consecration of the Osiris Temple No. 4 at Weston Super-Mare under the rule of our Very Honored Frater "Crux dat Salutem", and the West of England has been assigned to him as a province. Almost at the same time, the Horus Temple No. 5 under the rule of the Very Honored Frater "Vota Vita Mea" was also consecrated at Bradford in Yorkshire. These three Temples have now members not only in this country, but in the United States, Hindustan, Palestine, Denmark, etc.

It will be convenient if I now give you the name of our order in the several languages:

In Hebrew, the title is Chabrath Zerek Aour Bokhr, which means Society of the Shining Light of Dawn.

While yet Latin was in universal use among persons of culture, the name was Aurora.

Reference may now be made to the Rosicrucian Society which was reconstructed by Frater Robert Wentworth Little, a student of the Mysteries, assisted by Fratres Dr. W.R. Woodman, Captain F.G. and Dr. Kenneth Mackenzie. This Society, which has branches in England, Scotland, and the U.S., perpetuates the form of Rosicrucian initiation, which was conferred a hundred hears ago in England, and is mentioned by Godfrey Higgins, in his famous work "The Anacalypsis, or an attempt to withdraw the veil of the Saitic Isis."

Frater Little was a student of the works of Levi, and was also an eminent Freemason and the Rosicrucian Society as revised by him was made by intention and permission essentially Masonic, thus severing all connection with the many eminent Adepts who have not been craftsmen.

History narrates to us the splendid mental achievements of Basil Valentine, Artephius, Nicholas Flamel, Pastellus, Petrus of Abano, Cardan, Gaffarelli, Jacob Bohen and Robert Fludd. The Society in the same manner fails to recognize any worth for Occult research in women. This also is an innovation upon the scheme of the Ancient Mysteries in many of which, notably those of Isis, Priestesses and Virgin Prophets were prominent ministers.

I wish indeed to call especial attention to the fact that in several instances of the Ancient Manuscripts written in Cipher, where reference is made to the Fratres and Sorores, the words "her" or "him" occur, thus clearly showing that in older times, as at the present day, women rose to high rank and attainments in the Secret Knowledge of the Order.

History is by no means silent in respect to the success of women in Occult researches; mention may be made of Pernelle, the wife and fellow-worker of Nicholas Flamel, of Martin Bertheran, companion to the Baron Jean de Chatelet, who died about 1645, and of the widow lady (afterwards symbolized by him as Sophia - Heavenly Wisdom), fellow student and inspirer of Johann Georg Gichtel who died in 1700, famous as a Mystic Theosophist. The Occultists of today to not need to be reminded of the Great Hermetists and Theosophists of our day, of Dr. Anna Kingsford, of whom death prematurely robbed us. She was indeed illuminated by the Sun of Light, and no one who ever heard her lecture, and discuss the Hermetic Doctrines will ever forget her learning, or her eloquence, her beauty, or her grace. Of Madame Blavatsky, the leader of the Theosophical Society, a modern prophet of Esoteric Buddhism - no occult system, however wide apart may be his or her own favored path to wisdom, can fail to recognize in her a master-mind in a woman's frame.

The Soc. Ros. in Angela is, to some extent, exoteric in its lower Grades, but its concerns are regulated by Adepts of eminence (an inner circle) who still hold the Secret Knowledge of R.C. and in addition, the special, concealed secret information in the English Society, in which, of course the Members of the G.D. have no claim nor part, although they move along parallel lines.

The Soc. Ros. and its branches in the several countries, and the G.D. Order, both descend from the same parents and predecessors; the one developed into a masculine and Masonic system; the other retaining the ancient and more extended basis of the admission of all bonafide students; rich or poor, and without regard to sex, may alike go on and prosper without interfering with the tranquillity of the other, and can lead true and patient students who can Will - Dare - Learn, and Be Silent to the Summum Bonum, True Wisdom, and Perfect Happiness.