Osiris plays a vital role and is a central figure in the ancient Egyptian mysteries and the Golden Dawn Ancient Mystery School. ( Esoteric Order of the Golden Dawn ) It was Osiris who was the beloved pharaoh of Egypt. It was Osiris who taught the people of the land of Egypt about farming. Osiris was and is one of the first "Green Men", in that he was also the god of vegetation. When Osiris became ruler over the land of Egypt, the people were engaged in the practice of cannibalism. Osiris helped them to evolve beyond cannibalism and to learn farming skills.

Osiris is the husband of Isis. After thousands of years, all female goddesses became merged as an aspect of Isis; she too is central to Egyptian symbolism. Isis was well known for her powerful magic, her cunning and wisdom - she was the "breath of life" that brought life to what was dead. A good example of this is portrayed in the fable of "The Legend of Isis and Ra" as well as in the tale of how she restored her husband, Osiris back to life. 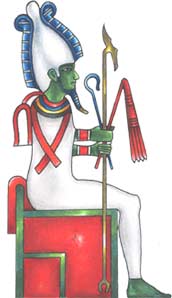 Most scholars know the tragic story of the death of Osiris. His evil brother Set murdered him. Set is equated with Typhon-Apophis of the Greeks. Set is the destructive aspect that the alchemical principal must undergo, and thus be reborn into a new and purified creation. That is exactly what happened to Osiris. His death or as the alchemist would say his putrefaction was carefully evolved through the power of Isis under the magical direction of Thoth.

Mostly, a formula was being created in the mythos. It is the alchemical formula of I.A.O., Isis, Apophis, Osiris, Birth, Death, Resurrection. To the Adept of the Golden Dawn Ancient Mystery School,  this is a powerful process of transformation that unlocks the keys of magical power and immortality.

For as Osiris died, through the power of Birth (Isis) under the authority and skill of Thoth (The Higher Genius) Osiris arose on the physical plane as the great avenging god Horus, his son. On the spiritual plane, Osiris became the great god of the underworld. Like Christ, he became the god that the Egyptians needed to become to be saved. What this means is that unless the initiate allows for the complete transformation of the self under the direct guidance of the Higher, no genuine and lasting power can be obtained. Osiris is the reconciler with the Lower Selfhood in which no birth or death is necessary. We can refer to it as "The Bornless One."

To the Ancient Egyptians, one must become Osiris. In that, no one can or could deliver the forty-two negative confessions in the hall of truth, because no one is perfect in earthly life. By identification with Osiris the candidate who stands in the Hall of Truth can indeed deliver the negative confession. The reason is clear, it is not him, but him in Osiris that is delivering the negative confession. His unification redeems the candidate in the Hall of Truth with Osiris.This unification in the Golden Dawn system takes place in the grade of 5=6, Adeptus Minor. Of the details, We can speak no more.

Click the links below to learn more about the Egyptian Mysteries